Citizens and visitors of Trinidad and Tobago personify the freedom of self through that euphoria that emanates whether a costume is worn, music is heard or by simply watching it all 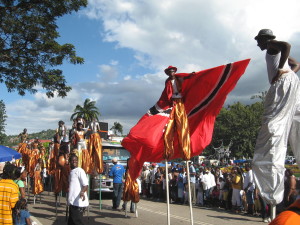 Here are just some of T&T’s popular traditional Carnival characters:

One of the great calypsonians of our time, the Lord Kitchner made this declaration on behalf of Carnival masqueraders: “The road made to walk on Carnival day…”

His song, composed in 1963, resonates up to this day as every year, for two days, the major streets of Trinidad and Tobago become the stage for colour, creativity and beauty. By beauty, we mean costumes and the people who wear them!

The history of Carnival brings to bear the singular characteristic that connects us with the past – freedom. Carnival was a celebration observed by the French plantocracy, as they bade farewell to the flesh with masquerade parties before the Catholic observance of Lent. But African plantation workers also celebrated Carnival with drumology and dance. They mocked the plantation owners in dress as they paraded through their villages. They also covered themselves in oil and molasses to depict the darker side of the Carnival.

A century later, with that legacy of masquerade, citizens and visitors of Trinidad and Tobago personify the freedom of self through that euphoria that emanates whether a costume is worn, music is heard or by simply watching it all.

Although Ash Wednesday indicates the beginning of Lent, a season of fasting and a lessening in indulgence, there are still some after-Carnival parties. However, the following week, all elements of Carnival would have subsided.